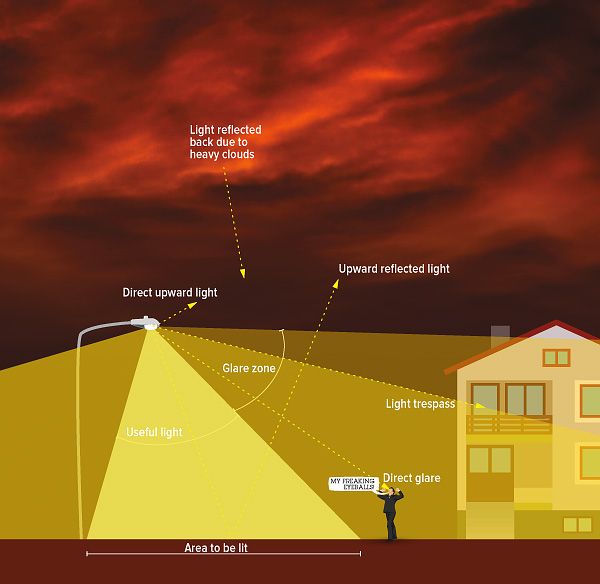 What is Light Pollution?

It’s the inappropriate or excessive use of artificial light – known as light pollution – and it can have serious environmental consequences for humans, wildlife, and our climate. Components of light pollution include:

Light pollution is a side effect of industrial civilization. Its sources include building exterior and interior lighting, advertising, commercial properties, offices, factories, streetlights, and illuminated sporting venues. The fact is that much outdoor lighting used at night is inefficient, overly bright, poorly targeted, improperly shielded, and, in many cases, completely unnecessary. This light, and the electricity used to create it, is being wasted by spilling it into the sky, rather than focusing it on to the actual objects and areas that people want illuminated.

How Bad is Light Pollution?

With much of the Earth’s population living under light-polluted skies, over lighting is an international concern. If you live in an urban or suburban area all you have to do to see this type of pollution is go outside at night and look up at the sky. According to the 2016 groundbreaking "World Atlas of Artificial Night Sky Brightness," 80 percent of the world’s population lives under skyglow. In the United States and Europe 99 percent of the public can’t experience a natural night.

Less than 100 years ago, everyone could look up and see a spectacular starry night sky. Now, millions of children across the globe will never experience the Milky Way where they live. The increased and widespread use of artificial light at night is not only impairing our view of the universe, it is adversely affecting our environment, our safety, our energy consumption and our health. 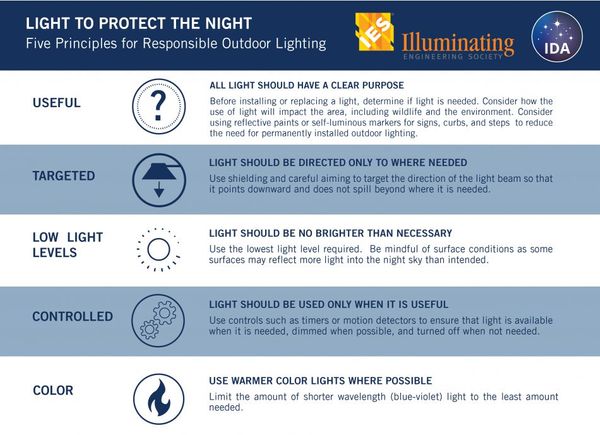 The good news is that light pollution is reversible and each one of us can make a difference. You can start by minimizing the light from your own home at night. You can do this by following these simple steps.

Then spread the word to your family and friends and tell them to pass it on. Many people either don’t know or don’t understand a lot about light pollution and the negative impacts of artificial light at night. By being an ambassador and explaining the issues to others you will help bring awareness to this growing problem and inspire more people to take the necessary steps to protect our natural night sky.